When we first moved to Bethesda, I was contemplating getting my own desk for our apartment, in addition to the desk that we brought from Hoboken. Jeff had always used that one more, especially during grad school, so it felt like “his” desk, and I thought that if I would be working from home it would make sense for me to get my own. But as the apartment came together and we discovered how much space there truly was, we decided instead to finish off the “office” with a bookcase that matched the desk we had. I’m glad we made this decision, as it made the space feel much more cohesive and provided some additional storage/room for tchotchkes.

For some of the five shelves, we knew immediately what they would hold: the bottom shelf would house the printer, another shelf would hold more of our ever-expanding book collection. Then for the third shelf, I knew I wanted it to hold notebooks and magazines—I have a bunch of brightly colored notebooks that I wanted to display, and our magazines needed a home other than on top of the coffee table. So to figure it out, we went to World Market. We don’t have World Market in Massachusetts, but now that I’ve been a couple times I like to think of it as a cross between HomeGoods and Christmas Tree Shops. HomeGoods because of all the fun, good quality and reasonably priced things for the home, and Christmas Tree Shops because it has almost anything you can think of, from baskets and paintings to pots, wine and giant jugs of pretzels. We went with the intention of sticking to the basket section, which is pretty big at the World Market in Friendship Heights. And this is what we came up with: 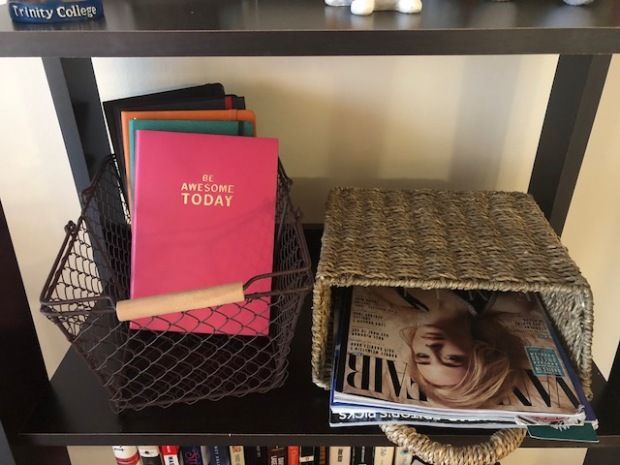 The one on the left is this rustic wire basket and the one on the right is this woven one. The left basket’s slim width made it the perfect size to house these executive-style notebooks, of which we have quite a few. The right basket is actually meant to be hung on the wall, and yes, when we bought it I was thinking about standing it up, but the handle made it too tall for the shelf. However, I quickly realized that I like it better this way, as it’s easier to get the magazines out and the handle is right there in case I do want to move the basket, say to a more central location. And yes, those are bookmarks in the magazines—I like to read beginning to end!

Side note: I have a subscription to Vanity Fair, my favorite magazine, and my goal is always to finish one issue before I receive the next one, something I occasionally stressed out about as I didn’t want the magazines to just turn into clutter. But now that I have this basket for them, I don’t have to worry about that! In the photo there are three magazines in the basket, so I would say it could probably fit at least eight more, though I don’t plan on getting that far behind.

At first, I wasn’t totally sure about mixing the wire and woven baskets on the same shelf, but I think it makes the shelf more interesting, and the brown handle on the wire basket is enough to tie it together with the woven one. I’m sure other things will make their way into these baskets over time, but right now I’m quite pleased with the purchases and how they look in our office!