I never liked the cold. Though I prefer sweaters and boots to shorts and tank tops, I’d much rather be sweating than shivering. Nevertheless, five years ago I fell in love with someone whose happy place is on a snowboard on the slopes. So in 2013, I made my first trip to Park City, Utah and stood up on a snowboard for the first time. We’ve returned to Park City every winter since, and each trip has been a delight.

There are some mountains in the Northeast. I am aware of this. But I hadn’t experienced anything like the Wasatch Mountains prior to going to Park City. This is actually my favorite part of snowboarding—the high of making it down a steep or tricky trail is certainly thrilling, but I’ve realized that it’s given me the chance to see and experience landscapes and places in our country that I didn’t know existed. I mean, look at this view:

The view from the Copperhead trail on Iron Mountain at Park City.

There have been few moments during which I’ve felt closer to or more in awe of nature than when I was breathing in the crisp, untainted air, feeling the winter sun on my face and taking in one of these spectacular views. These are moments I absolutely appreciate, and would never have experienced had I not gotten up on that board.

Taking the time to enjoy the view.

But now lets talk about this particular trip. We actually started the week with a trip to Solitude, a resort in the Big Cottonwood Canyon. The drive alone up the canyon offered different views of the mountains—it was rather harrowing to be on a road literally cut into the space between two mountains, but those fears were mitigated a bit by the giant driving box that was the Jeep Rubicon we got from the rental car company. It was one of those cars that would have felt a little silly driving around in this part of the world, but being there, we were glad to have it. Once on the mountain, the views from Solitude are different than the views from Park City; you can see sharper, rockier peaks as opposed to rolling mountains. Solitude also has a bunch of really nice, long blue trails, so it was a good warm up day to start the trip, which was also our first snowboarding day of the year. 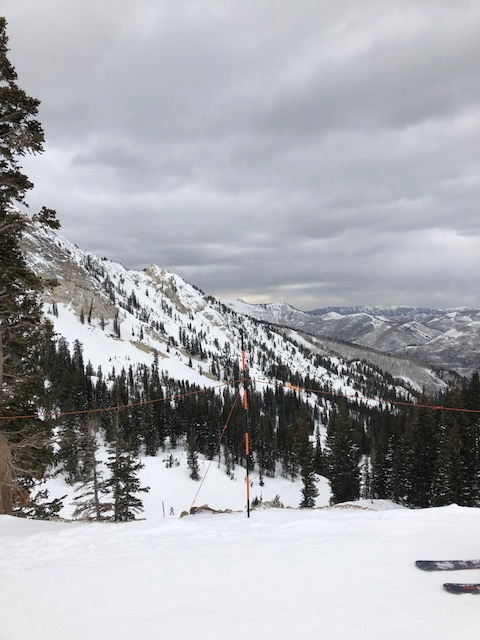 The top of one of the lifts at Solitude.

There used to be three resorts in Park City: Deer Valley, Canyons and Park City Mountain Resort. Deer Valley doesn’t allow snowboarders (booo), so that was never an option. PCMR is right in downtown, so that tended to get busier than Canyons, which boasted a broader selection of more varied terrain spread across a larger area. I’ll admit, Canyons was tough at times for a beginner, but I learned to love the fact that there are areas of the resort that offer the feel (at least, for me) of a backcountry adventure with none of the risks. But a few years ago, Canyons and PCMR merged to create Park City, and a gondola was built to connect the two resorts into one, making it the largest resort in the country. So that means that even though we stay with Jeff’s parents on the Canyons side, we can get all the way over to Park City if we want to. But more on that later.

Day 2 was last Monday, President’s Day. So, a holiday. There was also a huge snowstorm Sunday night, which meant Monday was a powder day. And snow-wise, this hasn’t been a great year for Park City. So all these factors came together in a perfect storm of insane busyness, with wait times of over an hour to get up to the mountain. Certainly not ideal, but once we finally got up to the slopes we (re: Jeff’s parents) did a pretty awesome job navigating to parts of the mountain that weren’t as busy. Even so, there was tons of snow on the trails, which was pretty hard work—at this point in my snowboarding experience, I can do pretty much any groomed trail, but those with natural snow and moguls I have a harder time with, and the storm meant that even trails that were “groomed” were pretty bumpy. But now, with the trip over, I’m kind of glad we had this day early in the trip, because I think it gave me more confidence on some trickier trails later in the week.

Day 3 was my off day. I’ve figured out over the years that three days is my maximum amount of snowboarding days in a row. If I try to do more, my legs get fatigued, I lose my technique, I fall more, and no one is happy. So I took this day off to do some work (yay freelancing that can be done from anywhere!) and I also had lunch with one of my mom’s college roommates who lives out there and I had never met. This was really fun for me, but I couldn’t even imagine what it was like for them—I’m trying to imagine now having lunch in 20 years with the daughter of one of my college friends, and it’s wild. A very cool addition to the trip.

Day 4 it was back to the slopes, and we ventured over to the Park City side. Day 4 was also the only true bluebird day, so I tried to take a bunch of photos: 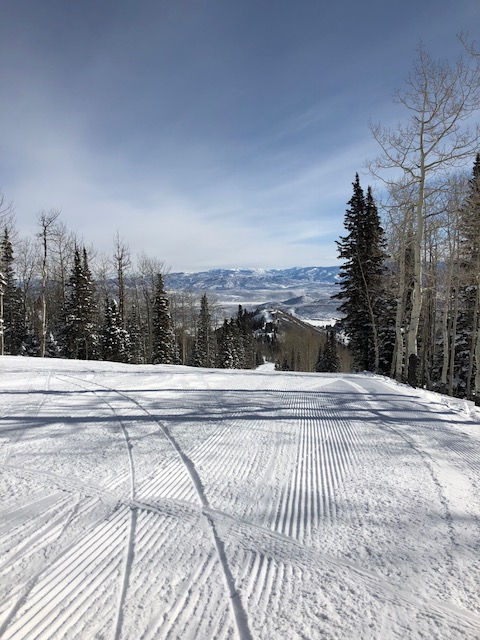 See all those even lines in the snow? Those were made by the groomers and mean that no one else had skied that part of the trail yet.

Another super cool thing about Park City, the resort and the town, is that you can ski right down into the middle of downtown, then there’s a lift to take you back up the mountain and drop you in the middle of the resort. On our last trip, we devoted an entire day to riding from the house on the Canyons side all the way over to town, which is basically the other end of the resort, had lunch in town, then went all the way back. We didn’t do that on this trip, but we still took a run on the trail into town.

That’s me, with downtown Park City in the background. So cool right?

Day 5 was a shortened riding day, since it was also Jeff and I’s five-year anniversary. So we spent some time on the slopes, then hit some of our favorite spots downtown. First stop was the High West Distillery the saloon that’s home to our favorite whiskey and makes some amazing cocktails. Mine was warm and featured whiskey, chamomile tea, sherry and a few other things. We also got this amazing popcorn as a snack:

It was caramel, bacon and cashew popcorn. Think that sounds like a weird combo? Well then, you’re a weird combo. It was delicious.

Once we had a cocktail in us, we schmoozed up Main Street. First stop was my all-time favorite store, Southwest Indian Traders, which I lovingly refer to as the bear store because of, among others, these little guys.

Most of the bear figurines in our apartment came from this store, and I just adore everything in it. We tend not to go into many galleries because we have no intentions of actually buying anything, but I always go into the Mangelsen Images of Nature gallery. I think his animal photography is spectacular. Perhaps one day we’ll buy one of his photographs.

For dinner, we went to the Wasatch Brewery. It’s at the top of Main Street and has a pretty big bar and dining area with delicious food and beer. I love when I get a server who suggests a beer I may not have chosen on my own, and ours gave us some delicious options. For dinner I had the buffalo burger, which was so tender, juicy and flavorful. You may have heard of Wasatch because the brew a beer called the Polygamy Porter, a fun reference to their Utah roots.

Day 6, our last day, was probably my longest day on the slopes—my first run was right around 9 and I got back down to the base to finish up around 3. Snow fell gently all day, coating the trails in just enough fresh snow to keep them nice and grippy. I did four black trails, which is a lot for me out there—I can do most black trails on the East Coast, but out West the scale is a little different and I can’t do as many of them. So I was really happy with that.

Overall, it was a great trip. Each day of riding ended with a soak in the hot tub, surrounded by snow, and our friend Rocky, the bunny who lives in the rock wall behind the house, even made a few appearances. I got to breath mountain air, eat delicious food, get a little terrified on top of mountains, and see my love in his happy place. And I’m proud to say, the cold doesn’t bother me quite as much anymore.

I snapped this one on the last day as I was heading down the mountain, just as the sun was starting to peek through.