This weekend, Jeff and I went on our first adventure outside of the Washington D.C./Montgomery County area, to Frederick, MD and the Flying Dog Brewery. If you’re ever looking for a fun weekend activity, that will even be a little educational, I strongly suggest doing some research into the craft breweries and distilleries in your area. Most of them offer tours, which usually feel like a steal money-wise based on the number of samples they give you during the tour—the one at Flying Dog was free, and they still gave us tastes of 3 or 4 different beers. You also get to learn about how the drinks are made and see the machinery used to make them, which I always find interesting.

A quick aside: This actually isn’t the first of these tours we’ve been on recently. We did one back in January of the Harper Macaw Chocolate Factory, which is in Northeast DC. Like the liquor ones, we got to see how the chocolate is made, from sourcing the beans to wrapping the bar, and also learned how to and got to taste a variety of chocolates. It was very cool, very delicious, and like the breweries and distilleries, a fun way to spend a couple hours.

Now back to this weekend. Flying Dog is in Frederick, which is the second-largest city in Maryland and about 40 minutes from Bethesda. We didn’t know much about it, apart from that it has a cute, historical downtown area, so we stopped there before heading to the brewery. We weren’t there for long and I’m sure there’s much more to explore, but the area we were in was filled with quirky brick townhouses along cute, narrow streets. We strolled down one street lined with shops and restaurants, then walked one block over and found ourselves at Carroll Creek Park, a shallow creek bordered on both sides by brick walkways and benches. 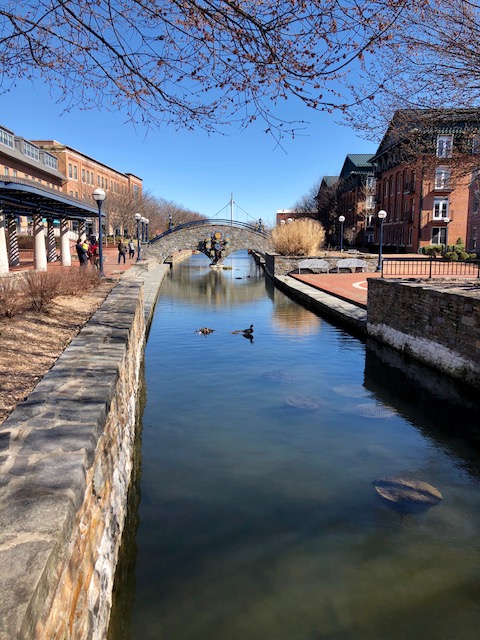 Even though we were very close to what appeared to be one of the main drags, it was so quiet along the creek, even though it was a beautifully sunny, crisp day. I love brick, and to be surrounded by that much, from the walkway to the buildings along the creek, was lovely.

One of the stone bridges crossing the creek. 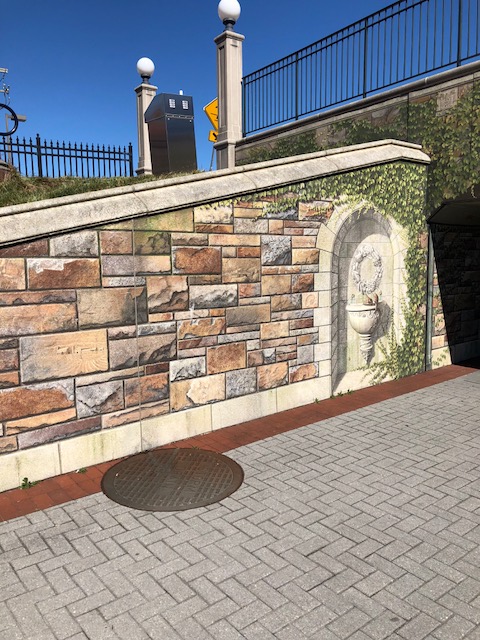 A wall bordering the creek. The stones and ivy are actually painted on!

We had a bit more time to kill, so we ducked into Emporium Antiques, which might be the best antique store I’ve ever been in—the prices were reasonable and they had tons of pieces that I actually wanted for the apartment. We bought a small oak barrel for the office bookcase, and I’m certain we’ll return to see what else we can find!

After our quick jaunt in downtown Frederick, we headed over to the brewery. I mentioned earlier that Frederick is the second-largest city in Maryland, behind Baltimore, so it was a bit shocking to drive just 5 minutes out and see so much open space. We paced a brand new community that only had a couple houses built so far, and it was a pleasant reminder that there are areas of the country, some very close by, that still aren’t completely developed.

The brewing facility in Frederick is the only place Flying Dog beers are produced, and their beers are sold all over the world, so it was a much bigger facility than some of the craft distilleries we toured back in New Jersey. That also meant we got to see every step of the process, from brewing to bottling and even the offices, unlike when we went to the Angry Orchard facility in upstate New York only to discover that most of their cider is actually made elsewhere.

Now I’m going to be completely honest. Before we realized that Flying Dog was local to this area, we didn’t really drink it. I had seen it in liquor stores before, but the artwork on the bottles and the names of some of the beers turned me off a little bit. Turns out, the art is done by the 81-year-old British illustrator Ralph Steadman, who used to work extensively with Hunter S. Thompson. Pretty cool. But we recently tried the beers and realized that they are quite delicious, and as I mentioned earlier, the tour was free. So it was a no-brainer.

On the tour, we walked through the steps of making beer. First stop was the kettles where the malt is mixed with water:

They actually let us taste this mixture, or beer before the hops, alcohol and bubbles were added, and my sweet tooth and I thought it was pretty tasty—a little sweet, a little nutty. Next we went to the room where they add the yeast and let it work its magic on the beer, which was filled with these massive drums: 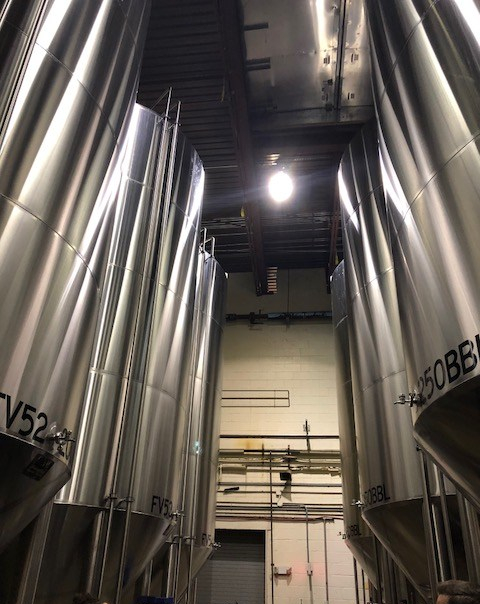 We got to taste another step in the process, the stout in between first and second fermentations. It was slightly more bitter than the finished product with fewer bubbles, since they carbonate their beer at the end of the process. Next we walked past the lab where they are constantly testing the beers and what happens to them when they are exposed to different environments, then to the massive machine that does all the finishing steps: bottling, capping, labeling, boxing, etc.

I guess the machine is enormous, but this is the part we could see through the window.

The tour guide mentioned a couple times that the brewing company that was in this facility before Flying Dog bought it and moved in had spent $1 million on this machine, which plunged them into bankruptcy and they were forced to sell the space and go out of business. I get that this was a big step in Flying Dog’s growth, but I don’t know, you could probably be a little nicer to these guys. They essentially made this super important purchase for you.

The tour ended with a walk through the open offices and into a conference room where the tour guide took questions. This portion ended with a pretty interesting discussion of a legal battle Flying Dog and Maryland’s other craft brewers are in the middle of right now, trying to change the limit on the number of barrels they can produce per year. But let’s be honest, the best part of the tour was the limited release beers they make for their tasting room and brewhouse that we got to come home with.

Not pictured is the Sweet and Smoky Stout, which I drank last night and was incredibly rich yet easy to drink.

We have been on a serious high-alcohol beer kick lately, so we were able to make our own six pack of varieties that start at 7.1% alcohol (the stout) and go all the way up to 10.2% (the barleywine). The tour guide said that Flying Dog invented the Belgian IPA style, and while I usually don’t like IPAs, I’m excited to try the tropical one, which was brewed with orange and pineapple. And now that we know it’s local, I’m excited to keep drinking Flying Dog’s creations in the future.

2 thoughts on “Flying Dog and Adventures in Frederick”