While we were living in Hoboken, we got a good amount of invitations over the years to alumni events sponsored by Trinity College, our alma mater. However, I never found any particularly interesting, or worth the often high price tag. So I was excited when, just a few months after moving the D.C. area, I received an invite for an event I immediately wanted to attend: a tour of the exhibit on narwhals at the Smithsonian Museum of Natural History.

Let me back up a bit. There was an article in a recent issue of the The Trinity Reporter about Martin Nweeia, ’77, a dentist and marine mammal biologist and one of, if not the, leading expert in the world on narwhals, the large whales that live in the Arctic with the giant tusk sticking out of the front of their head. Now I always think it’s exciting when I hear of a Trinity alumnus who is a leader in anything—having that connection is pretty cool. I eagerly read the article on Dr. Nweeia’s work, then forgot about it for a few months until I received an invite to attend a tour of a Smithsonian exhibit, Narwhals: Revealing an Arctic Legend, hosted by the man responsible for the exhibit, Dr. Nweeia himself.

Prior to reading the Reporter article and attending the tour last week, the first thing I would think of when I heard the word narwhal was the movie Elf. You know towards the beginning, when Buddy decides to go to New York, he steps on the floating sheet of ice, and an animal comes up out of the water and says “bye Buddy, I hope you find your dad”? That’s Mr. Narwhal. And apparently, this use of narwhals in pop culture has been pretty common over the last few decades, though that wasn’t the most interesting part of the exhibit for me.

I mentioned in my last post about this museum that the things that fascinate me the most when it comes to animals and the natural world are the things we know the littlest about. Until Dr. Nweeia began his research about 15 years ago, narwhals fell into this category. They’ve been around for thousands of years, but they live in remote areas of the High Arctic. They live in the ocean, so when they die, their bodies sink to the bottom of the sea—there aren’t any fossils for us to study. In years past, scientists have gotten. their hands on the tusks of dead narwhals, but the properties of the tusk when it is part of the narwhal, or alive, are so different from when it is dead, that these studies could only reveal so much. Dr. Nweeia has spent the last decade traveling to the Arctic to study the narwhals, with help from the Inuit people, which I’ll talk more about, and we now know much more about these creatures, though there is still much to learn. 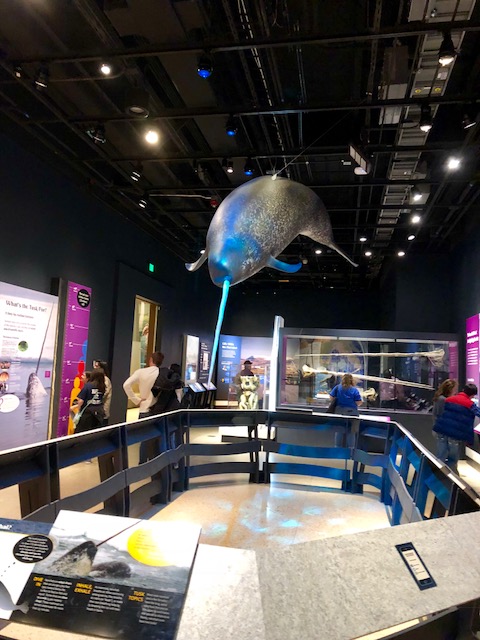 A life-size replica of the narwhal hanging about the exhibit.

Something that I quickly realized as a theme when it comes to the narwhal, which was pretty aptly summarized by a question one of the other group members asked later, is that we now know much more of the what about the narwhal, but virtually none of the why. I’ll just list off a bunch of the things I learned at the tour that we know about narwhals, but have no idea why they have these characteristics:

1) The tusk is actually a tooth, which grows through the lip on the left side of the mouth. It is always on the left side (they do have a tooth on the right side, but it doesn’t grow). Even though narwhals have had this tooth growing through their lip forever, it is essentially an open wound on the outside.

2) Narwhals have the genetic material to have 12 teeth inside their mouth, but it isn’t expressed. Despite the fact that they have no teeth, they eat fish, just swallowing them whole. In virtually every other animal on the planet, we can infer what their diet is by looking at their teeth. This is not the case with the narwhal.

4) There is fluid that runs through the tusk, and the makeup of the fluid is virtually identical to that of the oceans in which the narwhals live.

While we’re on the tusk itself, Dr. Nweeia also talked about how it is one of the strongest and also one of the most flexible substances in the world. When part of a live narwhal, the tusk, which is typically around 9 feet long, can bend up to 1 foot in any direction without breaking, which is incredible to think about. He said that there are labs currently trying to replicate narwhal tusks to use the material to make things like airplanes, because it could actually be stronger and more durable than the composite materials currently being used.

An Inuit sculpture of the narwhals. They do tend to swim in packs—sometimes of hundreds—very close to one another.

Finally, in the last part of the exhibit, Dr. Nweeia talked about the crucial role the Inuits have played and continue to play in his research. The narwhal is so elusive and there is so little material (fossils, etc.) for us to study, that the Inuits, the people who live alongside them, are our best resource. They know where to find them, how to interpret their behaviors, and because they do hunt them, they know a great deal about their biology. (Don’t worry, this isn’t a big deal. Narwhals aren’t endangered; their only predators are orcas, polar bears and humans. And there aren’t enough of any of these to significantly damage the narwhal population). Dr. Nweeia talked about how tenuous it can be to conduct research in the Arctic; you receive a grant, you go up there, but then you just have to hope that the weather cooperates, you’re in the right place and the animals show up. The Inuits can’t control the weather, but they can help you prepare for it, and they can make sure you’re where you need to be. Just like European cultures have legends involving unicorns, the Inuits have legends about the narwhals; they are part of their culture and their history. 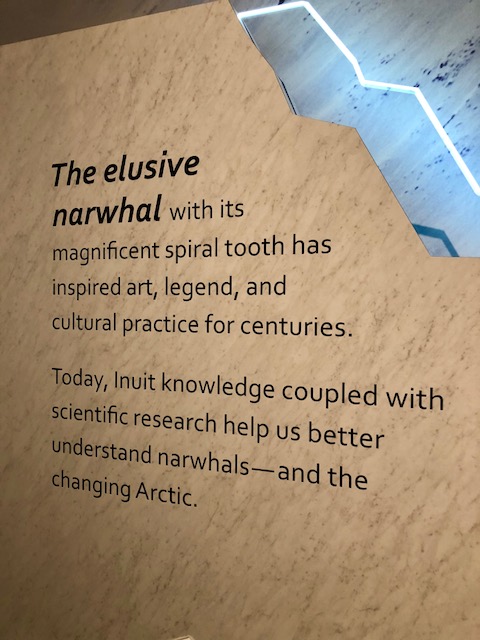 The above message is on one of the walls when you walk into the exhibit, and I think, as I’m sure it was meant to, it sums up the narwhal and the exhibit quite well. If you’re in the D.C. area. and any of this sounded remotely interesting to you, I strongly suggest visiting the exhibit! You won’t get the expert-led tour like I did, but the exhibit beautifully illustrates the fascinating world of the narwhal.