I’m going to be totally honest: I’m not sure why I started getting Cook’s Country magazine. I’m guessing that it’s because I’ve covered a lot of America’s Test Kitchen cookbooks for one of the magazines I work for, and my mailing address somehow found it’s way onto the subscription list. But hey, I’m certainly not complaining! I am always looking for new recipes to try, and as I’ve said before, I trust everything put out by America’s Test Kitchen absolutely completely. So this was my first recipe from Cook’s Country: Grain and Vegetable Bowls with Goat Cheese.

Now, I love a good grain bowl. I went through probably a three year phase, that only ended very recently, during which I refused to order salads that didn’t have a grain and/or warm component to them. Salads filled with only raw, crunchy veggies just weren’t doing it for me anymore. In recent months I have started to go back to those salads a bit, mostly thanks to all the amazing salad places in Bethesda, but I still love a good grain-based salad, or bowl, as they are trendily known. I also adore creamy goat cheese, so I was all in on this recipe. Here it is:

When I read this recipe, it had everything I love in a grain bowl: a chewy, hearty grain, a cooked element, a fresh element, a light dressing and a creamy, cheesy topper. And it was quite simple!

The first step was to cook the farro. Farro is quickly rising up the list of my favorite grains; I love how large the grains are and how chewy and substantial they feel. The cooking instructions in the recipe were slightly different than those on the package, but I opted to follow those in the recipe and the farro came out perfect. 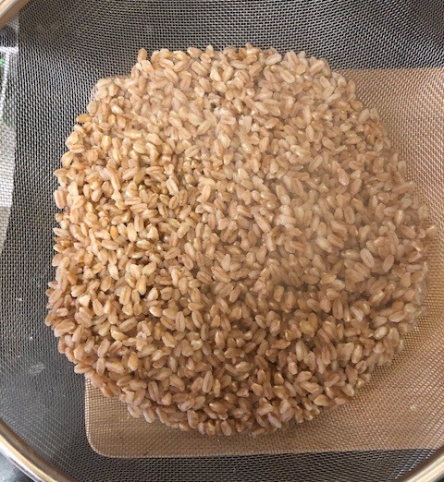 Next I mixed up the dressing while Jeff used a vegetable peeler to turn the carrots into ribbons. 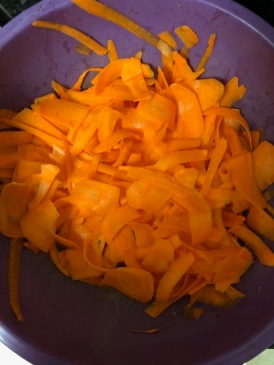 Then the carrots, spinach and farro went in a bowl with the dressing to get tossed. It’s important that you do this while the farro is still pretty hot, because it will wilt the spinach ever so slightly.  I don’t love the texture of totally raw spinach, but I can get down with ever-so-slightly-wilted spinach, so this was perfect. 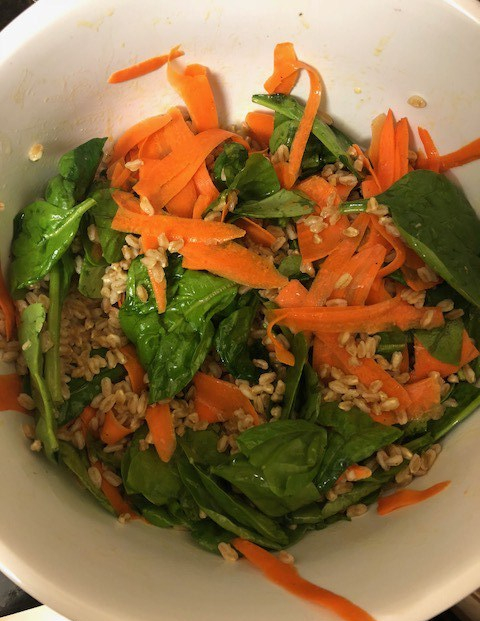 While those elements came together, I cooked the mushrooms, 5 minutes covered and 3 minutes uncovered. I’ve noticed in the past that mushrooms shrink a little when you saute them, and I think this method kept them from doing that as much. And for me, bigger mushrooms are always better.

I always try to follow a recipe as closely as possible the first time I make it, so I followed the writer’s instructions to put the grain mixture in the bowl, then top with some mushrooms and a sprinkle of goat cheese. And I must say, I think this is as close as one of my recipes has ever come to resembling the image that was printed. Look! 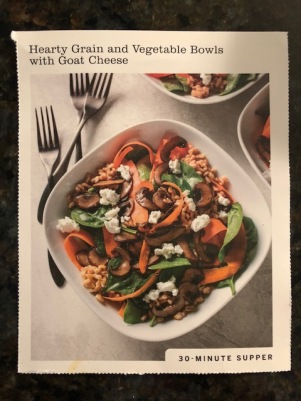 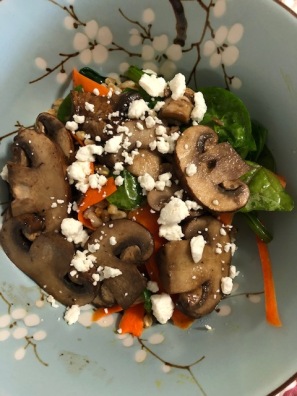 Spitting image, right? All these components went together beautifully. The farro was chewy, the carrots and spinach were crisp, the mushrooms were meaty, the dressing was light and tangy and the goat cheese was creamy and indulgent. This said it served 4, and there was plenty for 4 servings. After we ate, I simply tossed the remaining mushrooms in the bowl with everything else, then microwaved it by the serving the following day and it was still delicious. This grain bowl is something I will surely make again!