One and Only by Jenny Holiday is the first book in her Bridesmaids Behaving Badly series. I flew through this book—it was a fun, funny contemporary romance, perfect for a weekend getaway or just if you’re looking for a light and breezy read. 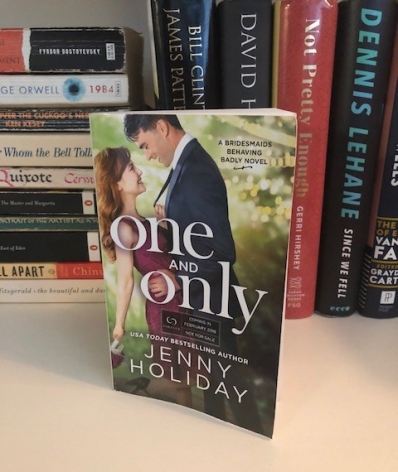 The last contemporary romance I read was set in a fictional town. Although it was fictional, it was a town I recognized and was able to relate to, so I didn’t really have a problem with it. In this book, Holiday goes in the total opposite direction. The book is set in Toronto, and the hero and heroine, Cameron and Jane, spend the novel playing tourist, visiting famous landmarks like the CN Tower and Niagara Falls. They basically went on a new adventure every day of the book, and I really liked this. It moved the action along at a great clip and I never got bored. It also helped the author to not get bogged down in the minds of the hero and heroine, which can happen in romance if there isn’t enough actually going on.

As far as the hero and heroine, I really liked Jane. She’s a writer who is thought of as the reliable friend in her friend group, the one who plays it safe and doesn’t take risks. As you might suspect, the hero, Cameron, helps her come out of her shell over the course of the book, but Holiday built this evolution in a way that it didn’t feel like he was forcing her to do anything she didn’t want to do. He gave her the confidence, but ultimately it was Jane who decided to take the leaps. Jane’s weak insistence on dieting throughout the novel so she could fit into her bridesmaids dress was so relatable, and I thought it was cute how that problem ended up being solved at the end.

I was on board for Cameron’s journey throughout most of the book, but I fell off a little during what should have been one of the emotionally climactic moments towards the end of the story. Without giving too much away, Cameron was convinced he didn’t deserve to have and love Jane for reasons that I thought were rather weak as a reader, and that even the other characters in the book thought were weak when Cam voiced them out loud. So Holiday did lose me a little bit there.

This was book one in Holiday’s Bridesmaids Behaving Badly series, which I think is an awesome basis for a romance series. Jane was one of three bridesmaids for her friend Elise’s wedding, and as you may have guessed, books two and three focus on the other two bridesmaids, who were developed just enough in this book to peak my interest in their stories, too. Elise was portrayed as your classic bridezilla, which is the perfect place to put a character you want to make a little annoying and demanding but also redeemable. But since I’ve started planning a wedding myself, I didn’t find all of her antics super believable—I feel like she would have finalized a lot of the details she was still taking care of in the week leading up to her wedding months before instead of at the last minute. But that might be me nit-picking a little bit.

My last little quip is actually about the cover. The couple on the cover of this book don’t really look anything like Jane and Cameron. Jane, for one, is a size 12—the size most women are—yet the model on the book cover clearly isn’t. The man is also much slimmer and more clean-cut than the way I was picturing Cameron. I know that the couples on the covers of romance novels are models, and they are never going to look exactly like the fictional characters, but I think they could have tried a little harder with this one to accurately represent the hero and heroine.

Overall, this was a contemporary romantic comedy with great pacing, a creative premise and a killer heroine that was great fun to read.