When I decided to get more serious about writing a novel, Jeff had the brilliant suggestion that I read Stephen King’s On Writing. I’m not a big Stephen King fan—horror isn’t my thing—but I had heard of On Writing from an episode of the podcast Pop Culture Happy Hour. They did an episode about Stephen King and devoted a surprisingly small amount of time to his commercial fiction, instead spending time talking about this book.  If I remember correctly, one of the panelists even said that he thought On Writing was King’s best work. So I picked up a copy, grabbed a highlighter and eagerly dug in. 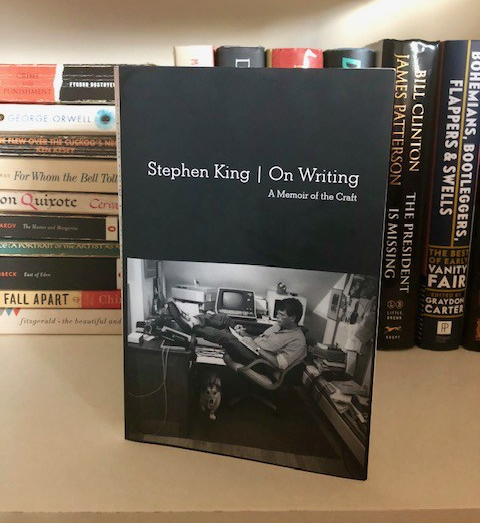 The book is broken up into a few parts, the first of which is a memoir of the years leading up to King becoming a successful novelist. I read more memoirs these days than I used to, but one of my gripes about the format is that I still find it very hard to believe that the author remembers such minute details about his or her childhood—far more than I remember. So I was delighted when King opened the book by admitting that he does not remember everything about his childhood either, and that the stories to follow were the snippets and experiences that he found formative enough to recall. This endeared me to the book immediately within the first two lines and I knew I was going to enjoy King’s conversational and humble tone, which carried through the whole book. Even so, the snippets in the first memoir portion were very detailed and offered a keyhole into his humble upbringing and his nearly immediate fascination with horror and sci-fi.

The second part was the big one: It contained all of King’s writing advice. Now, I haven’t read The Elements of Style, but I knew of it and how important it is considered when you’re talking about books about writing. So I kind of loved how often King referenced and quoted it; his idea was that if he agreed with something Strunk and White said, there was no need for him to rehash it. He could just mention what they said and move on. I also loved how often he included examples of prose from some of his favorite writers and books. It really helped illustrate his points and helped me visualize what he was trying to say.

As I mentioned earlier, I read this book with a highlighter in hand. So I’m going to go through some of the advice I highlighted and why I found it particularly interesting or helpful.

Use the first word that comes to your mind, if it is appropriate and colorful.  — I feel like one of the pitfalls of first-time fiction writers is the need or desire to mix long, complicated words into their prose. This helps me remember that it’s alright to use shorter, plainer words if they are the words that best help you illustrate what you are trying to say.

The best form of dialogue attribution is said, as in he said, she said, Bill said, Monica said. — I don’t consider dialogue my strong suit, so following King’s advice here has really helped me not get too bogged down with it and whether I think I’m doing a good enough job. His theory here, which relates to what he says about avoiding adverbs, is that if you’re writing your characters vividly enough the reader will hear their voices exactly as they are meant to be heard, even if you’re just using said.

Dumbo got airborne with the help of a magic feather; you may feel the urge to grasp a passive verb or one of those nasty adverbs for the same reason. Just remember before you do that Dumbo didn’t need the feather; the magic was in him. — Pretty self-explanatory.  I love the Dumbo reference. It’s so true.

You have to read widely, constantly refining (and redefining) your own work as you do so.

The real importance of reading is that it creates an ease and intimacy with the process of writing; one comes to the country of the writer with one’s papers and identification pretty much in order. — King mentioned repeatedly that reading constantly is just as important as writing constantly when it comes to being a great writer.

In my view; stories and novels consist of three parts: narration, which moves the story from point A to point B and finally to point Z; description, which creates a sensory reality for the reader; and dialogue, which brings characters to life through their speech. — King goes on to say that plot isn’t in this list because he doesn’t plot, since he believes stories make themselves, which is definitely a little scary to hear for a first-timer. Even so, he’s putting the onus on the creativity and the spontaneity of creation, and I kind of love that he has this rather romantic view of writing.

I think locale and texture are much more important to the reader’s sense of actually being in the story than any physical description of the players. — I totally agree here. When I’m reading, I feel much more in the story when I can see where the characters are than when I know what they look like.

The use of simile and other figurative language is one of the chief delights of fiction—reading it and writing it, as well. — This just made me really happy. I love similes, and he made me feel better about using them.

For me the answer has always been two drafts and a polish. — Revising is the part of writing a book that I’m the least comfortable with, so I was eager to see what King had to say here. He says you should write your first draft totally on your own, let it sit until you’ve basically forgotten what you wrote, give it a quick edit, then send it out to close friends for feedback. I’m going to try to follow this, though I’ve already changed the first part a bit. I think the hardest part is going to be not looking at it for a while once I finish the first draft;  he says to wait six weeks, but that seems so long! We’ll see what happens.

The most important things to remember about back story are that (a) everyone has a history and (b) most of it isn’t very interesting. Stick to the parts that are, and don’t get carried away with the rest. — Just very good advice.

Finally, the last section of the book was about when Stephen King was walking along a road in Maine, was hit by a car and almost died. I knew this section was in the book, but what I didn’t realize was that the accident actually happened when he was midway through writing On Writing. In it, he shares what he remembers from the accident—again, unafraid to admit there were parts he didn’t remember clearly—and how it impacted his ability and inspiration to write. This section really brought the book home for me. Again, I have never read a Stephen King novel. But after reading this book I feel like I at least kind of understand him and his genius. I feel like I took a trip into the mind of a visionary and he let me take a little bit of what I found home with me. If you’re an aspiring writer, or if you’re just curious about King and what goes into his craft, I strongly recommend reading On Writing. Preferably with a highlighter, but that’s just my opinion.

One thought on “What I’m Reading: On Writing”