We first made this meal a couple years ago during Passover (hence the no bun), and we loved it so much that we’ve been making it every couple weeks ever since. It’s super easy and can be adjusted to include your favorite burger toppings. At first, I would cook the burgers on a flat griddle pan, but then switched to my current favorite pan, the cast-iron grill pan.

Mine is from Princess House, but there are many companies that make them. So first, I heat the pan, uncovered, over a medium flame for 7 minutes. While it’s heating, I form four burgers out of 1 pound of lean ground meat, mixing in a little liquid smoke and seasoning with salt and pepper. Then once the pan is done heating, I put the burgers on, cover the pan, and turn the heat to low.

Those circles you see are indentations that I made in the center of the burgers so they would stay flat as they cooked. They cook on the first side for 4 minutes, and while they’re cooking Jeff sautes some veggies to go on top. We like bell peppers, onions and mushrooms, and cook them just until they’re starting to get soft. He puts the onions in first, then the peppers, then the mushrooms, so they all cook to the same degree of doneness.

After 4 minutes, I flip the burgers, put the cover back on, and let them go for 4 more minutes. 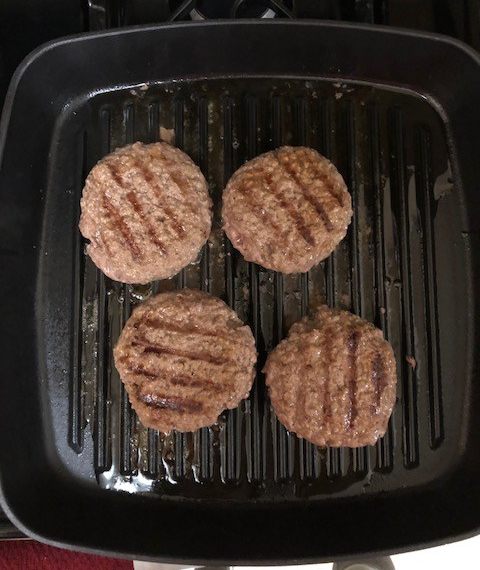 Look at those grill marks!

Then after 4 minutes, I put cheese on the burgers, put the cover back on,  turn the heat off, and let them sit for around 2 more minutes. The steam melts the cheese and the heat in the pan finishes cooking the burgers.

To serve, we load the burgers up with veggies (you can also add bacon for an extra crunch) and add a quick side like pasta salad or tater tots.

The burgers are super juicy, the cheese is nice and melty and the veggies are fresh, crisp and flavorful. Yum!! 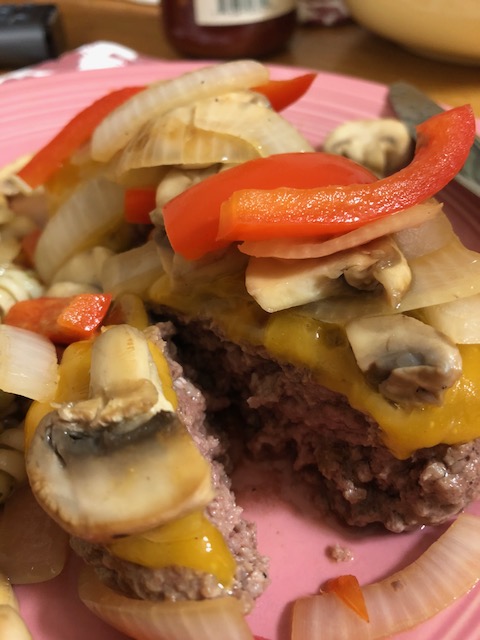