I recently added a new magazine to my monthly subscriptions: Bon Appétit! Admittedly, it’s because I was making an online purchase, and at the end there was an offer for a discounted subscription for a number of magazines. So now we get Bon Appétit and Outside magazine. But I was particularly excited about Bon Appétit, resolving to try at least one recipe from each issue in hopes of expanding my cooking skills and recipe repertoire. Last night was my first try; I made the Slow-Roasted Salmon from the April issue.

Here’s the recipe as shown in the magazine: 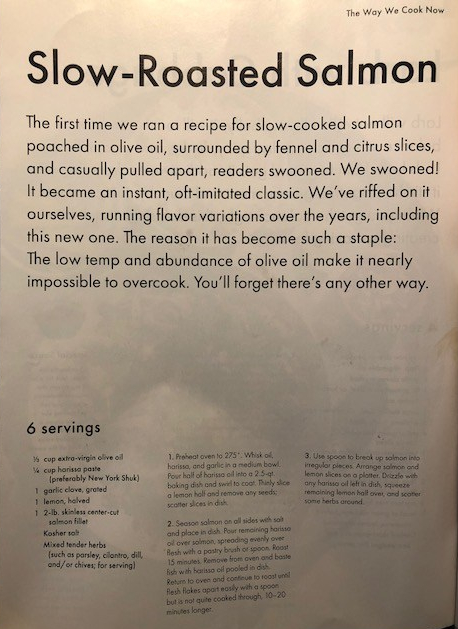 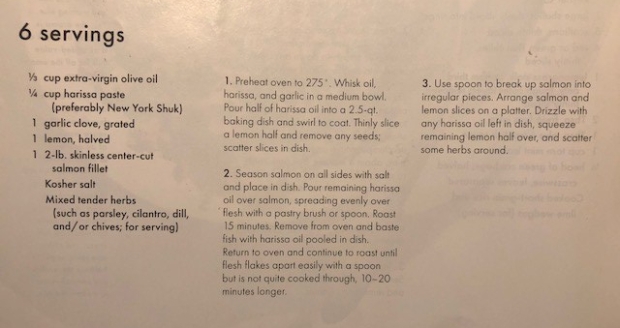 One of the reasons I picked this recipe was because the ingredients list is so short. That might be the biggest factor when I’m deciding whether or not to try a new recipe, specifically, how many specialty ingredients I will have to buy. For this dish, there was only one: harissa paste. I did not go out of my way to find New York Shuk harissa paste. Instead, I bought the one they had at Trader Joe’s, which was this one. I had never used harissa and wanted to smell it, so I brought the jar up to my nose and breathed in deeply. This was a mistake, as the hot chili paste is quite pungent and burned my nostrils a little. So I recommend sniffing gently. 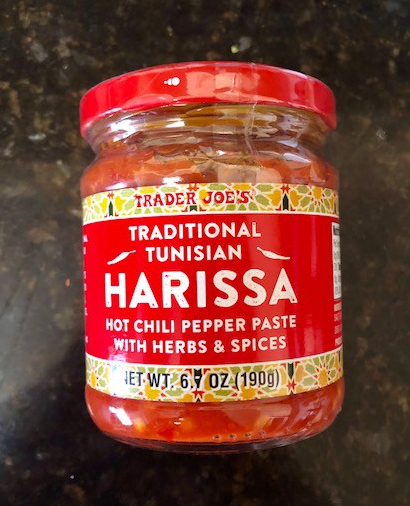 Then began step one! I mixed the harissa paste with olive oil and garlic, poured half in my baking dish, and spread lemon slices on top. 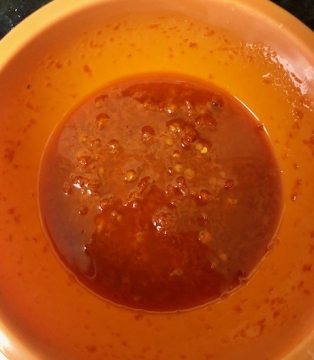 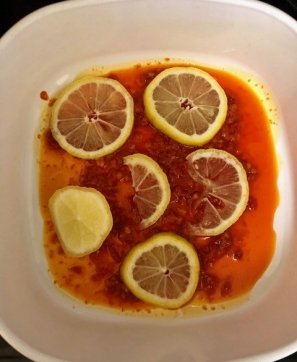 For the pan, the recipe called for a 2.5-quart (roughly 2.3 liters) baking dish. I have a set of ceramic dishes that are 1.5 liters, 2 liters and 2.5 liters. I went with the 2 liter dish, which is a little smaller than 2.5 quarts. But the salmon fillet I bought was only about 1 pound, not two, because it was just for the two of us. So it fit perfectly. The recipe called for skinless salmon, so I used my hands to peel the skin off of the salmon fillet. I have no idea if this was the best way or the proper method for taking the skin off the salmon, but I didn’t want to use a knife for fear of cutting off and losing some of the fish. I realized about halfway through that I should have put gloves on to keep my hands from getting fishy, but a few washes later and the smell was gone. After peeling off the skin, I seasoned the salmon, put it in the dish and spread the rest of the harissa oil over the top. 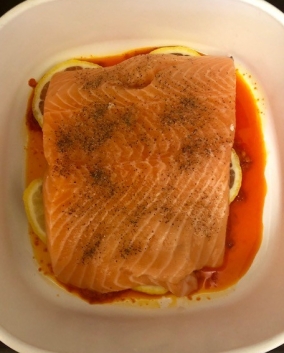 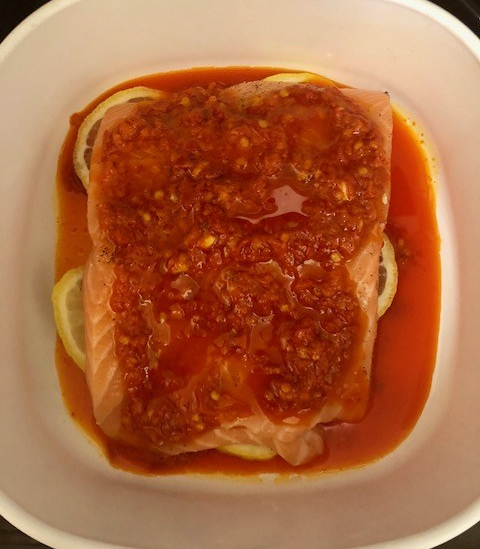 The recipe instructs roasting for 15 minutes, basting the salmon, then roasting for 10 to 20 minutes more. I don’t have a baster, so I just used a small spoon to scoop up some of the oil in the pan and drizzle it over the fish. For the second part, I went with 12 minutes, because I didn’t want the salmon to get mushy or overcooked, and it was perfect. Here’s what the fish looked like after 15 minutes, and then after 12 minutes more. 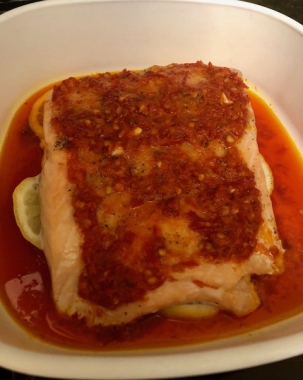 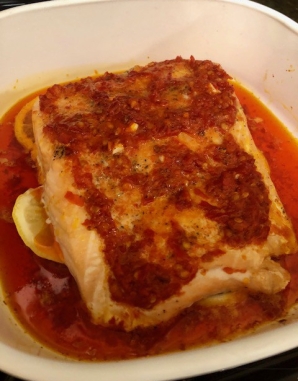 Once the salmon was cooked, all that was left was to break the fillet up into pieces, drizzle with lemon juice, and plate! As a side dish, we picked up one of our favorite easy ones, the frozen Asparagus Risotto from Trader Joe’s. 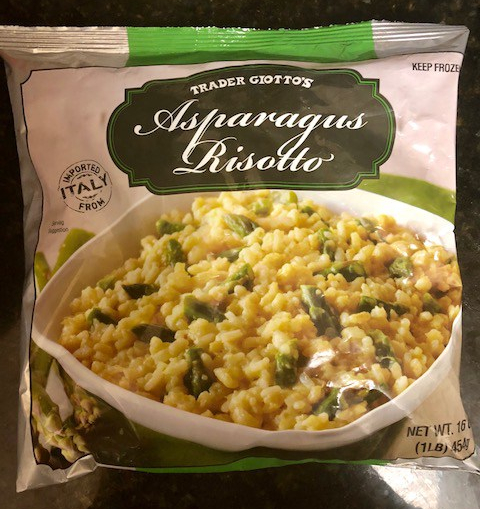 The risotto is obviously Italian, but it ended up going with the salmon really well. The salmon was spicy, and the creaminess of the risotto was the perfect complement to ease the heat. Cooking the salmon in oil makes it incredibly tender; I ate it with a fork, but probably could have eaten it with a spoon. 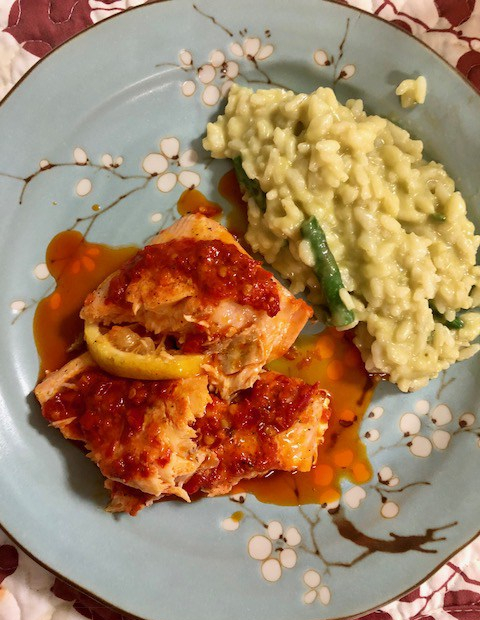 Harissa was a flavor palate I wasn’t super familiar with, but I really enjoyed it. It was warm and bright to start and spicy to finish. Roasting salmon slowly at a low temperature was a technique I hadn’t tried before either, but it came out delicious. Plus, it seems like a method that would be easy to try with any flavor profile I wanted to put together, swapping the harissa and lemons for another flavor oil and a different citrus. Overall, this meal was fresh, new and very delicious! 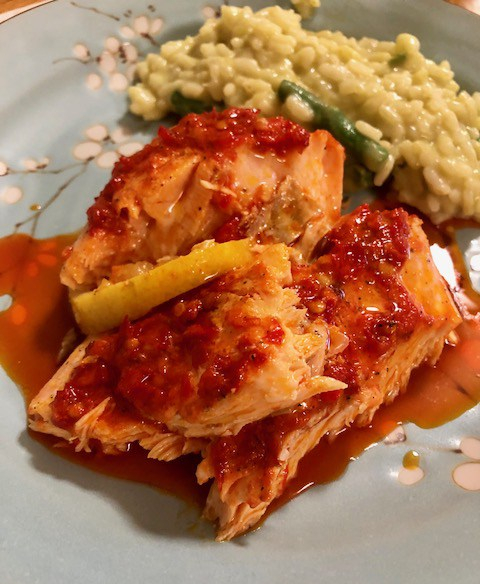