Continuing the theme of homemade snacks and treats for entertaining, I made some mini crab cakes for my family’s visit a week ago. I had never made crab cakes before, or worked with lump crab meat at all for that matter, but they were pretty easy to make and quite delicious!

The recipe for the crab cakes themselves came from America’s Test Kitchen’s The Complete Make-Ahead Cookbook. The make-ahead part here was key. My guests arrived Friday afternoon, and I wanted to have the crab cakes for happy hour on Saturday, but I didn’t want to have to do much prep or cooking on Saturday. I ended up making the crab cakes on Friday morning then keeping them in the fridge until I popped them in the oven on Saturday. This ended up being a couple hours longer than the 24 hours the cookbook authors recommended chilling them for, but they still came out great. Without further ado, here is the recipe:

I really wanted these to come out great, so I did my best to follow the recipe to the letter. First, I chopped my scallions and parsley and laid out all my ingredients.

Then I gently dumped the crab meat into a bowl. I’ve noticed in the past that every single recipe involving lump crab meat tells you to pick over the meat for pieces of shells, so I was wondering if there would be a lot. In this particular container at least, there weren’t. I might have picked out one or two pieces, after which I added the scallions, mayo, bread crumbs, parsley and Old Bay to the bowl. The only tweak I made here was the bread crumbs. I had panko in the cabinet, so I used those.

Next, I mixed up all those ingredients and carefully folded in the egg.

The next step in the recipe calls for forming the crab cakes and placing them on a baking sheet to chill. You’ll notice that there’s flour in the ingredient list, which was supposed to be used to coat the crab cakes right before cooking. However, I thought that incorporating the flour into the cake-forming process would make it easier, which it did. To make the crab cakes, I poured out some flour into a bowl. I used a regular spoon to scoop out some of the mixture, sprinkled some flour on the side facing up, and shaped the mixture into a crab cake shape while still on the spoon. Then I put a little more flour on my hand, flipped the crab cake onto my fingers, sprinkled on some more flour, shaped the crab cake a little more, then placed it on the baking sheet. The flour helped keep the crab mixture from sticking to my hands. I would also recommend using gloves for this process if you have them—my fingers smelled like crab for the rest of the day. 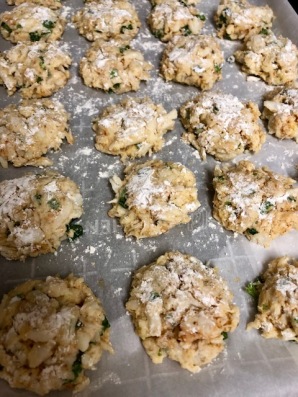 Now, this is the point where I diverged from the America’s Test Kitchen recipe. They called for mixing up a homemade chipotle mayonnaise and then frying the crab cakes on the stove. Because I was going to have to put these together with guests in the house, I didn’t want to fry the cakes, so I decided to bake them instead (that also meant I didn’t use the vegetable oil in the above recipe). I ended up baking them at 375°F for about 12 minutes, then flipping them and baking for about 12 minutes more. The crab cakes would have definitely been crispier if I had fried them, but I prefer the crust on crab cakes to just be enough to hold the cake together while letting the crab meat shine, and this method achieved that.

The crab cakes were a beautiful golden brown, the meat was tender, and the Old Bay, scallions and parsley had them bursting with fresh flavor. I served them with these three sauces I had on hand, and they were all delicious.

I think the next time, I might play with the cooking temperature and time a little bit, perhaps trying the broiler instead. But this recipe made quite a few crab cakes, and they were all gone in a matter of minutes. So I would call that a success!