I’m not going to sugarcoat it: Enchiladas can be a pain in the neck to make. For that reason, they tend to fall in the category of food I often order in restaurants, but don’t make too frequently. However, when I came across a recipe for classic chicken enchiladas in my favorite slow cooker cookbook, I thought I’d give it a shot. It seemed like cooking the chicken in the slow cooker would at least make the process feel like less work since it was spread out over more hours. And it did!

It started by cooking the chicken in the slow cooker in a mixture of onions, spices like chili powder and cumin and tomato sauce. Here’s what it looked like when it was done:

The next step, which also could have been done ahead of time (though I did the remaining steps all at once), was to shred the chicken:

Then mix in some of the sauce, some chopped jarred jalapenos, and some shredded cheese:

Next came the tricky part, filling and rolling the enchiladas. I love the flavor of corn tortillas, but every time we use them they tend to break. This time, I diligently followed the instructions in the cookbook to brush them all with oil (well, I sprayed them with olive oil spray because I don’t have a pastry brush), stack them, wrap them in a damp dish towel, and microwave them to soften. Then, with help from a wonderful sous chef handing me tortillas (it was Jeff), I filled them, rolled them, and placed them in a baking dish on top of a thin layer of sauce. So, how did I do?! 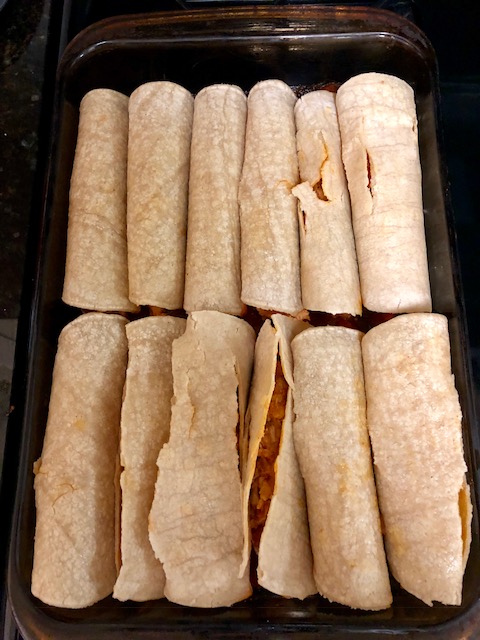 I’d call that bad breaks on 3 of the 12 tortillas, which I think is pretty respectable. I think the snug fit in the baking dish (it’s a 9″ by 13″) helped prevent the tears a bit, since once the enchiladas were in they couldn’t move much. The ones that did rip ripped in the act of rolling, not after they were already sitting in the dish. I’m guessing part of this had to do with the fact that the tortillas were sitting in our bread drawer for about 5 days before I used them—maybe if I’d used them right away, they would have been more pliable? But in the end, I suppose it didn’t matter, since they still tasted great.

And stick them in the oven for around 15 minutes to melt the cheese and warm through: 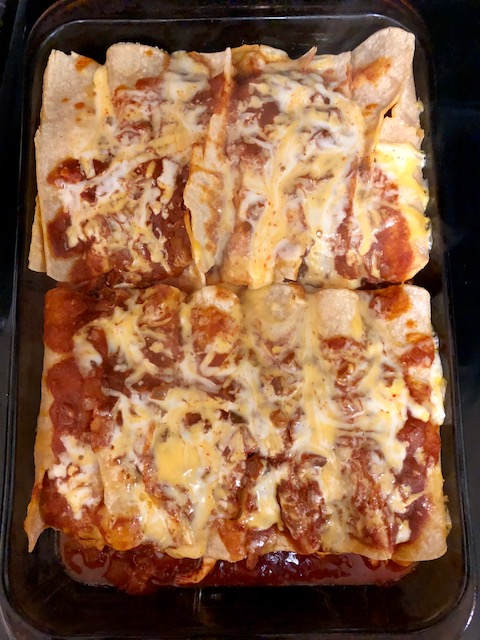 To serve, we topped with some guacamole from Trader Joe’s. I can handle some spiciness in my food, but I was a little wary here, especially of the jalapenos. However, jarred jalapenos are pickled, which means they are a little less spicy than fresh jalapenos. And because I chopped them so small, that basically eliminated the possibility of biting into a pepper and getting blasted with a hit of spice. The coolness of the guacamole also helped balance it out. As for the sauce, I think it can be compared to a ranchera sauce you might order at a Mexican restaurant, tangy and flavorful—I actually thought it tasted exactly like, if not better than, a canned enchilada sauce we’ve bought from the grocery store in the past. The chicken was tender thanks to the hours in the slow cooker, as were the tortillas. Because this was my first time making this recipe I tried to stick to it exactly, but next time I might add some other ingredients to the enchilada filling, maybe some bell peppers or black beans. But overall, I would give this dinner two thumbs way up!